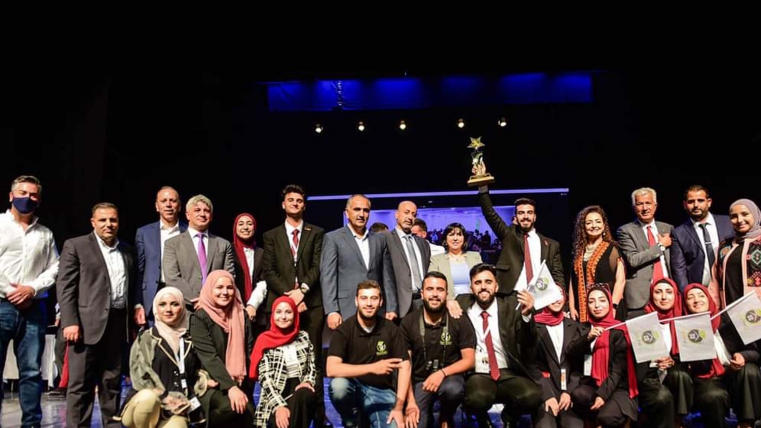 Ahmad Hijawi, an inspiring junior at Al-Quds Bard College majoring in Economics and Finances, with a minor in Computer Science, decided with a team from Al-Quds University to tackle the problems of industrial stone waste and scattered tires in the West Bank-Palestine. With his team, they competed and won first place for the best entrepreneurial project at INJAZ Al-Arab Organization’s Regional Competition in Qatar for 2021.

Ahmad’s and his team’s project is an environment friendly company called CleanPalCo which works on providing useful alternatives and solutions to construction bi-products. The start-up company formed in order to address two problems, the first being the mound of stone waste from local quarry companies that ends up being disposed of in sewage networks and agricultural lands. The second issue is the accumulation of rubber tires, which causes great harm to the environment and surrounding communities. Together, Ahmad’s team engineered a way to recycle these waste products into construction materials, such as bricks, sidewalk tiles, and rubber floors.

CleanPalCo was established as a result of an application submitted to INJAZ Palestine – an active non-profit organization and member with INJAJ Al-ARAB – while Ahmad was taking Prof. Dalia Al-Najjar’s Open Society University Network course “Social Entrepreneurship”. This was a course co-designed by AQB faculty member, Prof Al-Najjar, in collaboration with other scholars across the OSUN for the fall semester of 2020. The students who participated in the course received consistent support and coaching by RebelBase Company.

On August 30th, CleanPalCo earned first place for “The Best Student Entrepreneurial Company Award” at INJAZ Palestine’s local competition after competing with eight other universities. This phenomenal milestone made CleanPalCo the company that represents Palestine at the regional competition in Qatar on November 30th, 2021. The Palestinian team competed virtually with thirteen other countries from around the Arab World in the Qatari contest, eventually taking home first prize yet again for Best Student Entrepreneurial Company in the Region.

Ahmad, as CleanPalCo Financial Manager, said, “[n]ow, and after this achievement we are going to officially start running the company.”

In addition to his involvement with CleanPalCo, Ahmad Hijawi is also a co-leader of EcoAQB Club at the College, which is a student-led initiative aimed at combating climate change in Palestine and the region. The club strives to raise climate consciousness and awareness. Additionally, he is a co-leader of the Health and Safety Committee at AQB, where he works closely with AQB staff, faculty, and students to create and enforce safety measures across campus during the pandemic. Recently, Ahmad was elected as the Chair of Academic Committee at AQB Students’ Club.

For more details, you can check CleanPalCo’s website and social media platforms here below:

In 1999 Al-Quds University created the “Community Action Center” (“CAC”), a semi autonomous association, which aims to empower the Palestinian community in East Jerusalem. The CAC, located in the Old City of East Jerusalem as well as in the Al-Abraj Buildings in Abu Dis, is a Palestinian non-profit community rights-based organization.